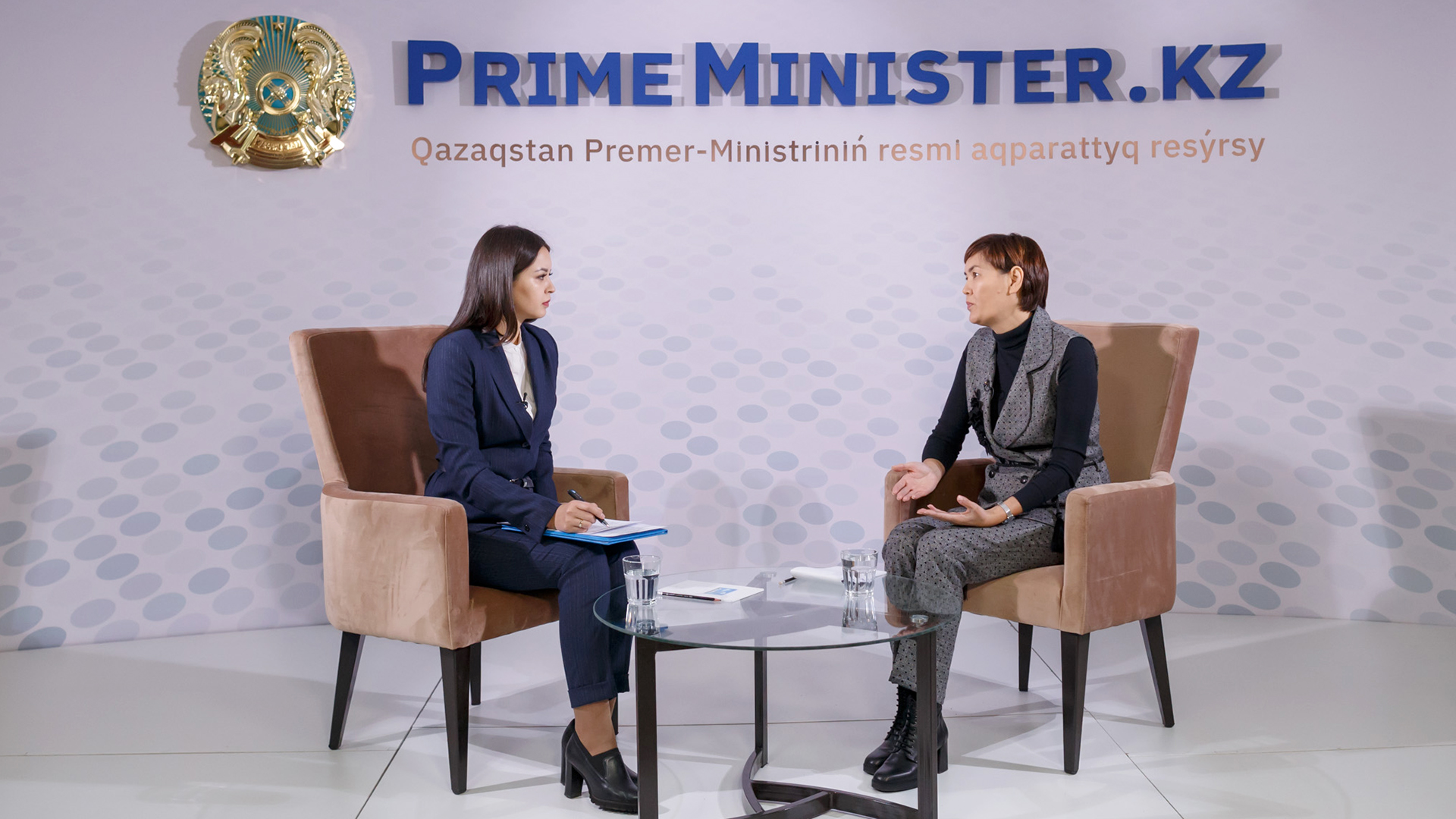 Government of Kazakhstan is carrying out comprehensive work on the introduction of renewable energy sources in Kazakhstan. The international exhibition Expo-2017 on the theme "Energy of the Future" gave a serious impetus to the development of renewable energy in the country. At the initiative of the First President – Elbasy Nursultan Nazarbayev, the International Center for Green Technologies and Investment Projects was created, which promotes joint projects in the field of high-tech industries. In his Address to the people of Kazakhstan “Constructive Public Dialogue – the Basis of Stability and Prosperity of Kazakhstan,” the Head of State Kassym-Jomart Tokayev instructed the Government to intensify work to expand the use of renewable energy sources. Director of the Department for Renewable Energy Sources of the Ministry of Energy Ainur Sospanova spoke in more detail about this work in an interview with PrimeMinister.kz.

— Ainur Saparbekovna, Sep. 25 in Nur-Sultan, the main green event of 2019 was held — the III International Summit on Renewable Energy Sources. Also, the other day you took an active part in the 12th Kazenergy Eurasian Forum. As far as we know, the issue of green energy sources was one of the main topics on the agenda. Tell us how the forum was held in general, and how does our country fit into the world agenda for introducing the latest green technologies?

— The green agenda is today one of the most relevant topics not only in Kazakhstan. At the site of the XII Kazenergy Eurasian Forum, III Summit of Renewable Energy, the discussion of the future of energy in Kazakhstan was very intensive.

Today this is a very relevant topic in the world. Just the other day, the UN General Assembly also discussed this. The president of Kazakhstan gave his comments on this subject. The topic is very important, it affects the future of the planet as a whole.

Kazakhstan cannot remain aloof from these processes. We have rich hydrocarbon reserves, fossil sources. We cannot all the time rely on the fact that we have fossil sources and we don’t care what will happen to the planet in the future. Therefore, in 2013, by Decree of the Head of State, the Concept of Kazakhstan’s transition to a green economy was adopted. Those sectors were identified in which we have great potential for greening the economy of Kazakhstan.

Energy and renewable energies have enormous potential. The Concept reflected those indicators that we will develop both in the short term until 2020 and in the long term until 2030-2050. These indicators in the amount of 3% by 2020, 10% by 2030, and half of energy consumption, taking into account alternative renewable sources by 2050, are perhaps the contribution to international climate action that Kazakhstan can really make.

If we talk about discussion platforms in the framework of the XII Eurasian Forum Kazenergu, III Summit of Renewable Energy, then we see great interest from both those interested in the decision at the level of state bodies, and great interest from investors. Since renewable energy today is becoming very attractive for investors. This is thanks to the policy that we have been pursuing over the past 10 years. In 2009, a law on renewable energy was adopted. This year in summer we celebrated the 10th anniversary of this law. In 2013, we made changes to the law and introduced the concept of fixed tariffs and a single purchaser of RES of the Settlement and Financial Center.

— What is a fixed rate for renewable energy?

— The fixed rate of renewable energy is the rate at which the state undertakes to buy all the generated energy from the investor who built the renewable energy source. Settlement and financial center concludes a 15-year contract with this investor, he is the buyer of all this energy. And it is the Settlement and Financial Center that gives this 15-year fixed rate. In 2014, we adopted a Government Decree on a fixed tariff for wind, solar, hydropower, and biogas plants. Since 2014, the sector has been actively developing.

— The Prime Minister Mamin, in his speech at the Kazenergy Eurasian Forum, noted that the renewable energy portfolio expanded to more than 3 thousand megawatts and increased production by 31%. What does this mean for us?

— The contracts concluded between investors and the Settlement and Financial Center are approaching 3 thousand megawatts. For Kazakhstan, this is an impressive amount. To date, 81 facilities with an installed capacity of 930 megawatts are already operating. Just yesterday, another station in the Karaganda region with a capacity of 50 megawatts was commissioned. This is a solar station. A German investor is already actively developing renewable energy projects in Kazakhstan. In the near future, new facilities will be gradually introduced in the country's energy balance. All these 3 thousand megawatts, which today are in the portfolio of the settlement and financial center, will be gradually built and introduced into the country's energy balance. What does this mean for us? At the end of 2018, the share of renewable energy amounted to 1.3% of all generated electricity. At the end of 2019, we expect this share to grow to 2.3%. During this year, we are very actively commissioning facilities. At the end of 2019, 980 megawatts will operate in the country. These are 86 projects.

— How many renewable energy projects have already been implemented?

— Now out of these 86 projects, 81 projects are operating. Five more objects in different regions of the country will be introduced. For us, this is a good signal that the goals that we set for ourselves at the end of 2020 — 3%, are quite achievable.

— Are foreign investors mainly involved in the implementation of renewable energy facilities, or are domestic investors also interested in this? How active are Kazakhstan companies?

— Let's go back to the socio-economic effect. 86 projects are naturally the creation of new jobs. Are there any statistics regarding the employment of Kazakhstanis in these enterprises?

— At different stages of project implementation, of course, a different number of employees is involved in the project. During the construction of the 50-megawatt solar wind station project, up to 300 builders will participate in the project. And when the project is built, then there is a small staff — from 10 to 30 employees. Of the 300 builders who work during the construction period, of course, the majority are Kazakh builders. During the operation period, even if they are people who will be involved in security and escorting the object, it is the local residents of nearby villages who are involved. Since these are regions that are far from large cities, each workplace created in these regions is very valuable.

Another social effect is that regions receive taxes. After all, every enterprise that is being formed in a given region registers an enterprise in this area, since a land plot is allocated and a project is being implemented. They bring taxes to this particular region. In addition, many projects take on social-corporate responsibility, the construction of some sections of roads, access roads, street lighting of the village, children's yards, sports grounds. What will be the impact of this project on this particular locality is discussed during public hearings, which all projects must pass. The company that implements the project takes on specific obligations and the people already understand that this project brings some benefits to them, the citizens of this village.

Well, it’s also important — in each such settlement there is a school, children who, by the example of these power plants, begin to understand what it is. Perhaps, thanks to such projects, a lot of students will be interested in energy, go into engineering, become good electric power industry, and possibly continue on their journey on such stations. And this is perhaps the most tangible effect that is associated with our future.

— Earlier, the First President, Elbasy Nursultan Nazarbayev, commissioned to create his own energy potential for applied research and training. What about training, are grants allocated?

— We have universities where specialists in the field of electric power graduate. There are special disciplines, the teachers of which know the technology of renewable energy sources, and gradually train new specialists. For those projects that are already being implemented, of course, we need new personnel who already know how to work with it.

We are very active in working with universities. This is Nazarbayev University, and the Almaty Institute of Energy and Communications, Kazakh-German University. In the summer, we conducted an expedition when Central Asian students traveled to many renewable energy facilities in the south of Kazakhstan, in Kyrgyzstan, Uzbekistan, and Tajikistan, and looked at what renewable energy projects are in the countries. This initiative was supported by the Ministry of Energy of the Republic of Kazakhstan. We asked renewable energy enterprises to tell our students what they have. We hope this experience will scale. Since we understand that a student who spent 20 days and gained enormous experience in these 20 days will already specialize in this industry, because he understands why, why he studies, what he wants.

— You said by the end of the year 86 RES projects will be implemented. How much foreign investment will they attract to the country's economy?

— Speaking appropriately, by the end of 2019, we will have 86 facilities with an installed capacity of 960 megawatts. We estimate this at $ 1 billion. These are investments that will create jobs, pay taxes and generate green energy. In addition, of course, the effect of these investments is the creation of a new industry and the training of our Kazakhstani specialists. This involves both the Kegoc system operator and network organizations.

— What types of renewable energy sources are most actively developing in Kazakhstan? Solar, wind? How do renewables develop across regions? As far as we know, a number of projects have already been implemented in the Almaty region. What about the rest of the regions?

If we talk about how to choose a place for the implementation of the project, it is very important, of course, the presence of the resource itself. We have developed wind and solar atlases that show how the so-called “deposits” of wind and sun are located regionally. They are publicly available on the Internet. Many foreign investors have come to Kazakhstan thanks to these atlases. We did this work together with the UN Development Program. This is the work that has shown the potential of renewable energy in Kazakhstan.

The second important step that will need to be taken is to investigate in what places in the regions of Kazakhstan the network economy is available. Since the integration of renewable energy sources in the network is perhaps the most difficult and important issue that needs to be addressed. Accessibility of land in Kazakhstan is large. We have many territories, but networks do not always have the opportunity to integrate such intermittent energy sources as renewable ones. If the sun is shining or the wind is blowing, then energy is generated. In the absence of this resource, the station cannot generate electricity. The network will have to balance the absence of this electricity, that is, the integration of renewable energy - this is the issue that investors will need to solve.

It is important to understand that the deployment of renewable energy should be where there is a need for this electricity. We cannot transport this energy over vast distances — this is a loss, and there will be no economic effect. Therefore, it is necessary to develop where there is a need. Basically, the deployment of renewable energy sources is planned and located in the south of the country, where new industries are developing. Therefore, here we develop renewable sources taking into account the needs of Kazakhstan in such electricity.

— Thanks for the interview!