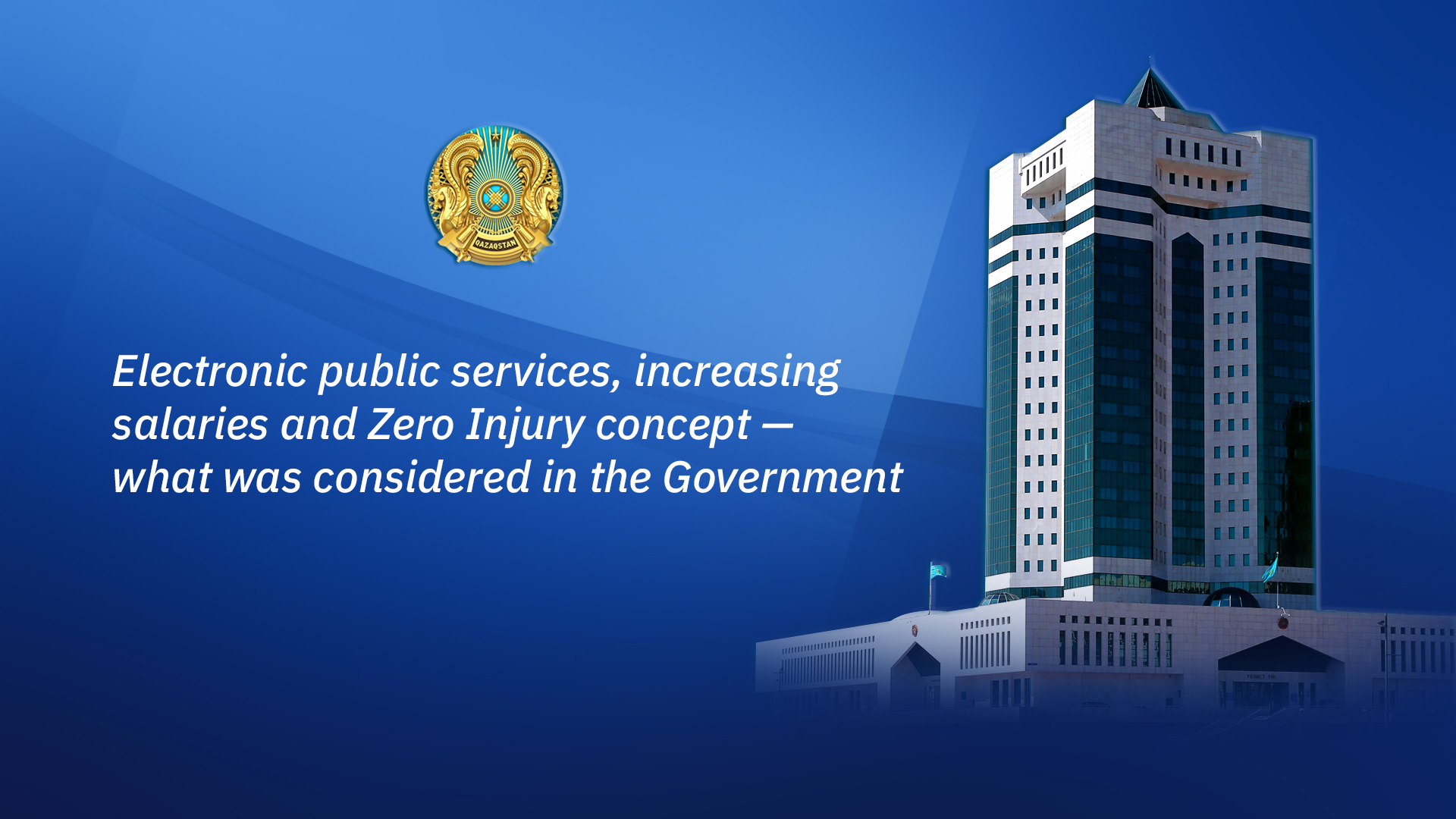 At the regular government session on Nov. 26, 2019, the Cabinet of Ministers considered the issues of developing e-government and improving digital literacy of the population, measures taken to regulate labor relations were also discussed. On the sidelines, explanations on increasing the excise tax on gasoline and instructions on expanding the use of smartphones in public institutions are given. Following the meeting, a press conference was held with the participation of the Minister of Labor and Social Protection of the Population Birzhan Nurymbetov.

Minister of Digital Development, Innovation and Aerospace Industry Askar Zhumagaliyev reported that 723 public services are included in the State Services Register, of which 580 services or 80% are provided in electronic format, 648 or 89.6% of services are provided through the Government for Citizens. 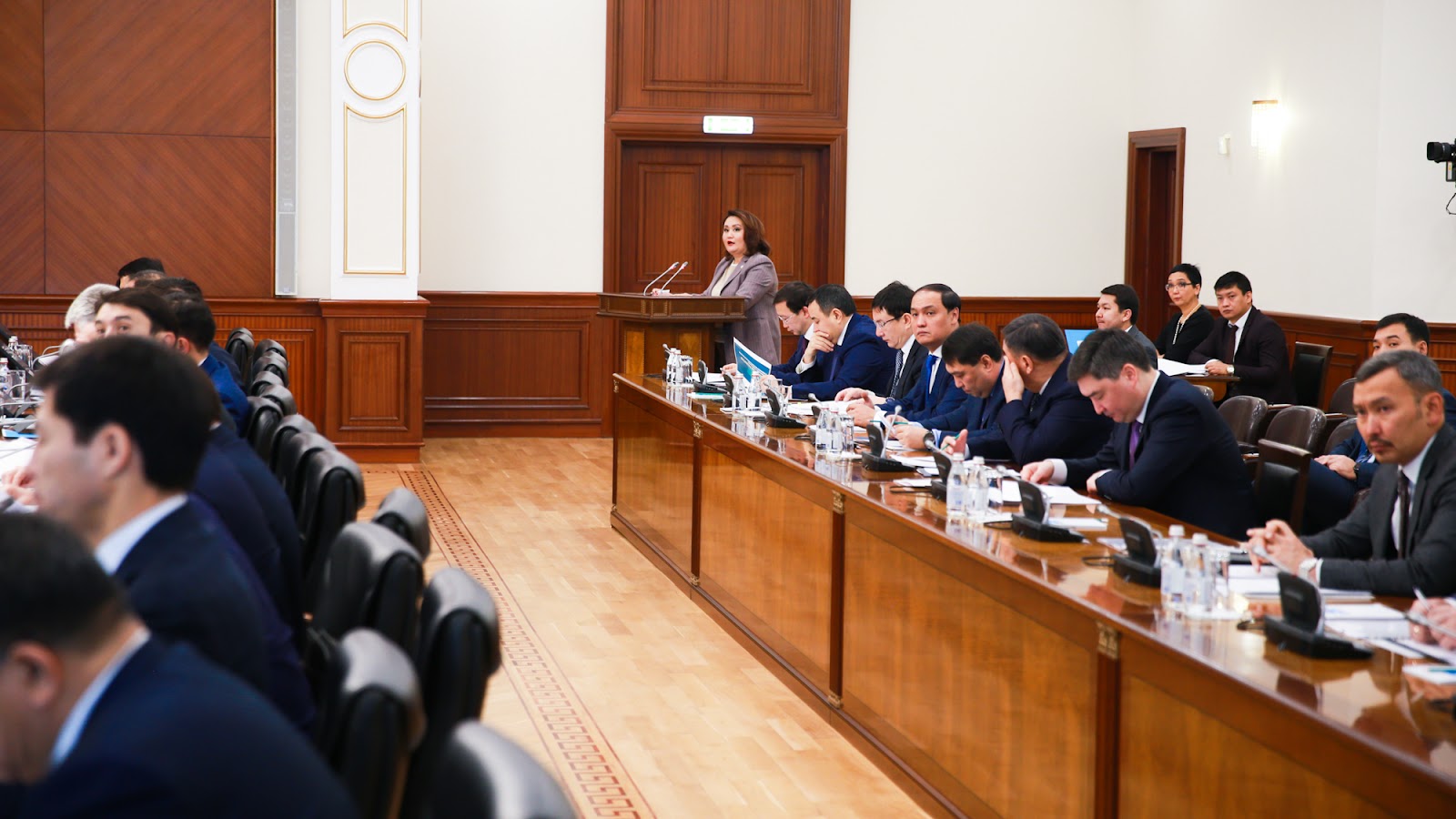 According to Chair of the Board of the Government for Citizens State Corporation Assemgul Baltasheva, the state corporation provides public services through 348 front offices, 16 specialized, 17 migration and 18 digital PSCs, 1,656 Kazpost offices for receiving and issuing documents.

According to the results of 10 months of this year, more than 10 million users were registered on the eGov portal, 36.5 million services were provided. The level of digital literacy at the end of 2018 amounted to almost 80%. 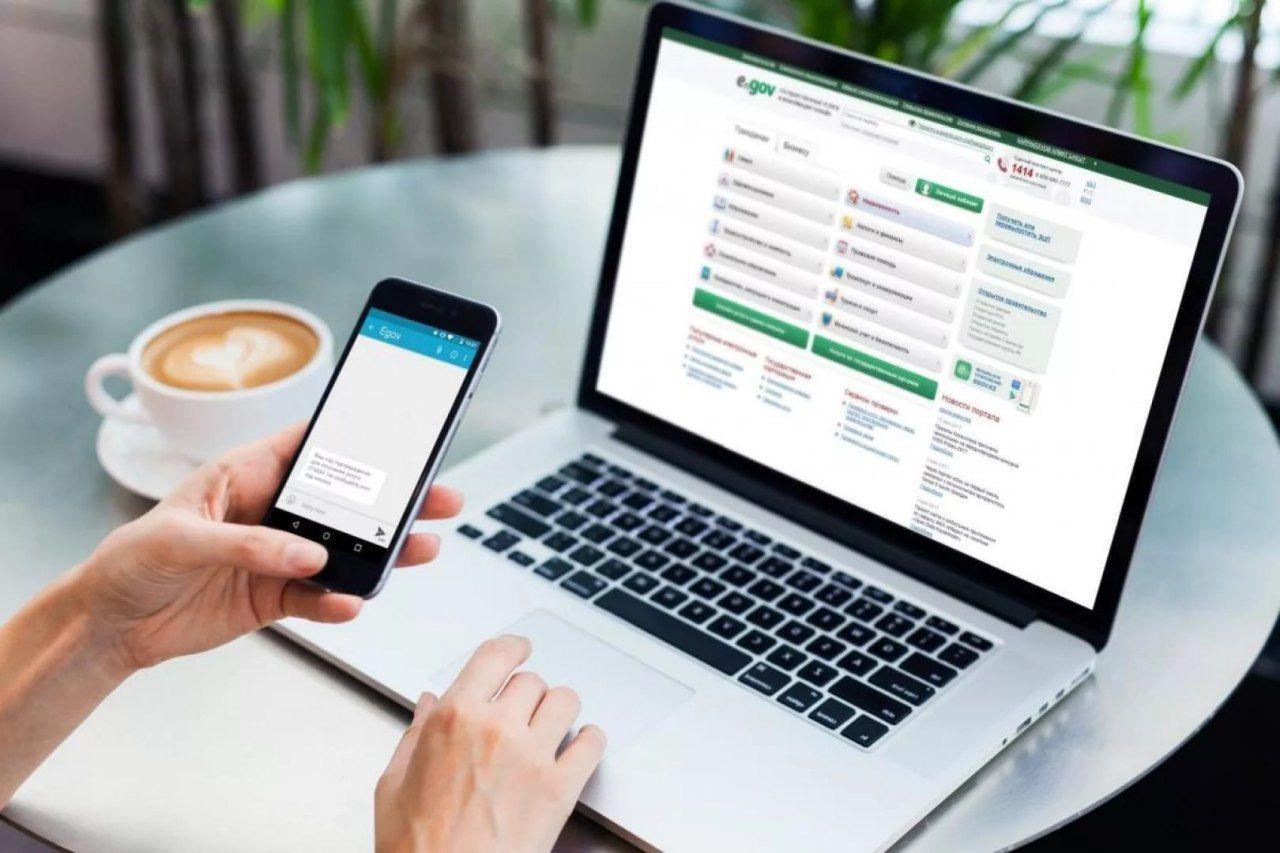 Since Nov. 1, the address certificate has been excluded, citizens annually received more than 14 million of such certificates. The exclusion of this document gives an economic effect of about 3.3 billion tenge. Work is underway to exclude another 27 references.

One of the most convenient ways to receive public services is mobile technology (64% of Kazakhstanis use smartphones. In October, a new format of mobile application was launched – eGov mobile, which implements 31 services and services.

The prime minister set the goal of bringing the availability of public services through the Internet to 90% by the end of 2020 and instructed to speed up work to expand the list of public services available to the population through mobile devices.

Mamin pointed out to the Government for Citizens State Corporation the need to develop distance learning tools for citizens in districts, small towns, and villages through the use of digital technologies. 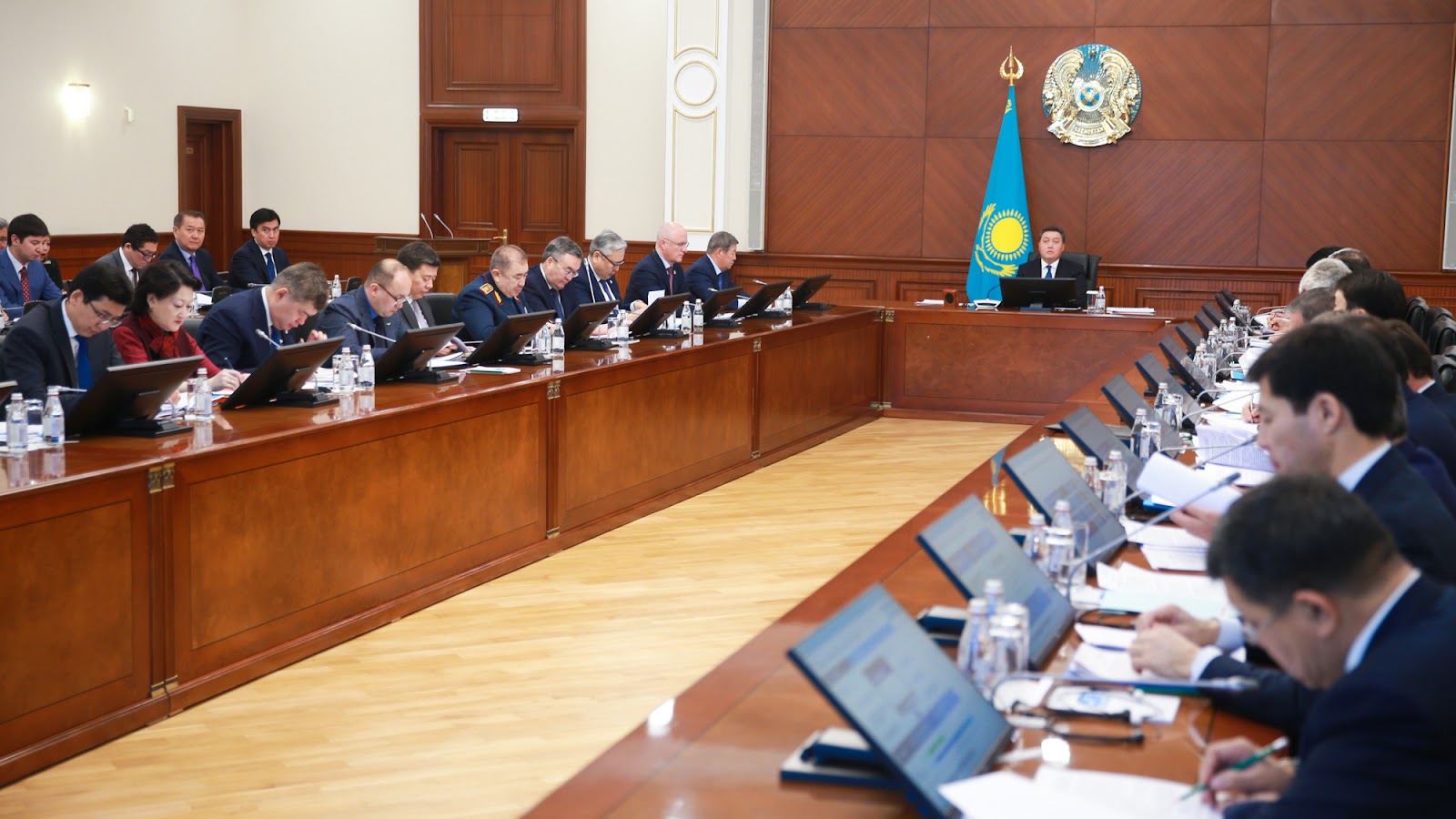 It is necessary for all central government bodies to complete the transition to the Unified platform of Internet resources by the end of this year.

In July 2019, the Government introduced a draft law to the Majilis of the Parliament amending certain legislative acts of the Republic of Kazakhstan on labor issues, providing for the translation of labor contracts into electronic format, establishing obligations and responsibilities of employers to create decent working conditions for workers, fixing measures to introduce OSH management systems and other measures. 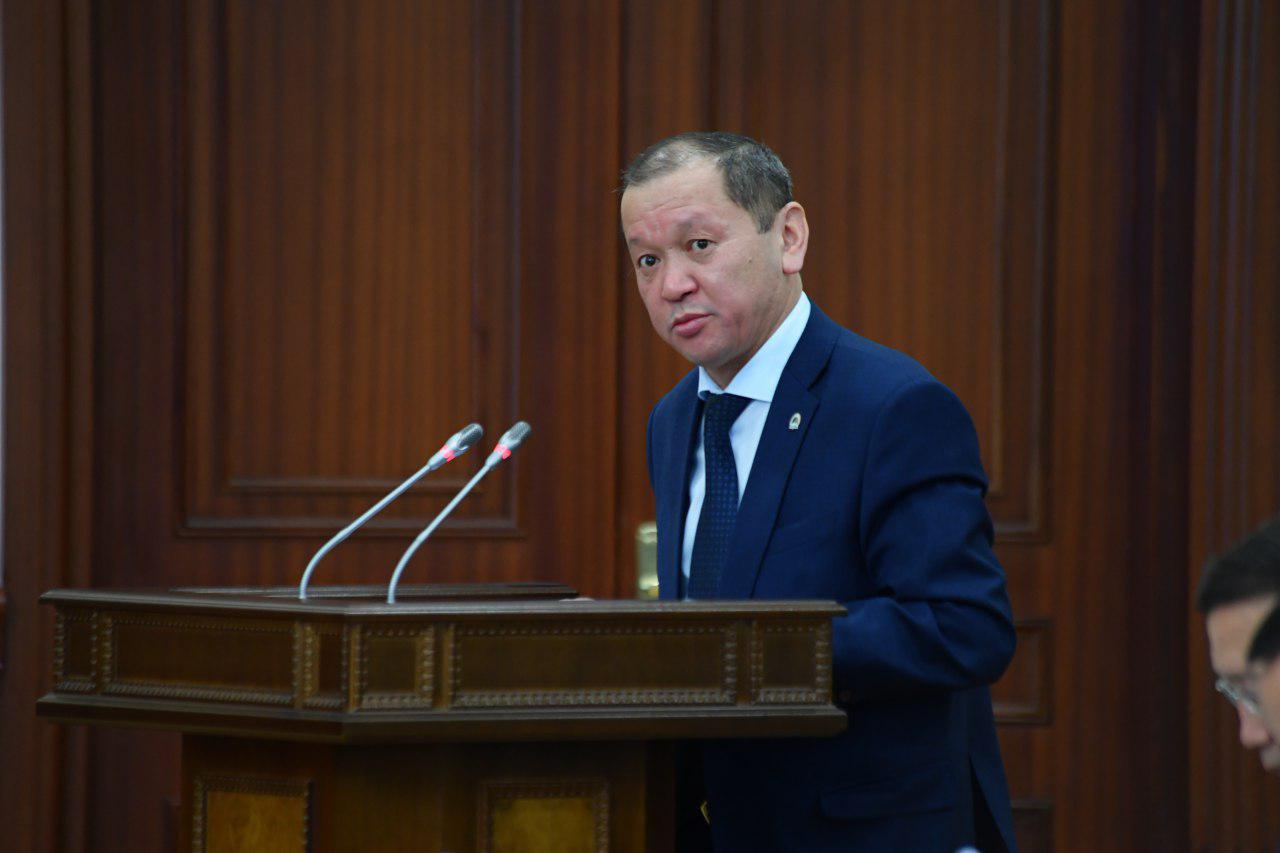 Over the past 3 years, labor inspectors, together with the prosecutor's office, revealed 930 facts of violations of labor and migration laws, including 474 facts of wage imbalances at 25 enterprises, 681 permissions were revoked, 393 foreign workers were expelled from the country.

At the same time, Mamin drew the attention of members of the Government to the low use of mediation in labor issues.

“The solution to almost every labor conflict takes place with the participation of state bodies, while these issues should be resolved, first of all, at the employer-employee level through the mediation of the trade union,” the prime minister said, instructing to submit proposals by the end of this year on transformation of the social partnership format.

On the sidelines of the Government, Director of the Department of Tax and Customs Policy of the Ministry of National Economy Azamat Amrin told reporters about the reasons for the increase in excise tax on gasoline.

“The basic principle of taxation is that taxes should be consistent with the level and size of services provided by the state. Social obligations of the state are growing, salaries of civil servants are increasing, the number of targeted social assistance receivers is growing. The funds will be used for these purposes,” Amrin said.

He reminded that today the excise tax on gasoline is 8 tenge, the price of gasoline is 150 tenge.

“We are increasing the excise tax rate from 10,500 tenge to 24,435 tenge, in the price of a liter this will be an increase of 10 tenge, that is, the excise tax will increase from 8 to 18 tenge. Thus, the price will increase by about 6% – from 150 to 160 tenge per liter. I would like to note that excise duty is not the only component of cost, cost, sale,” said the director of the Department.

According to him, directly the price of 10 tenge will not increase. So, in 2015, the rate was similarly raised from 4.5 thousand tenge to today – 10.5 thousand tenge, while gas prices did not rise.

“We calculated the impact on inflation, you know that the consumer price index is calculated on the basis of 500 types of goods, 3 of them are gasoline – AI-93, AI-95, AI-98, a contribution of 0.6%. In this regard, inflation will ultimately be multiplicatively of the order of 0.35%, that is, in the corridor established by the National Bank,” he said.

Minister of Digital Development, Innovation and Aerospace Industry Askar Zhumagaliyev spoke about the current process of discussion and coordination of the issue of using smartphones by civil servants in administrative buildings. 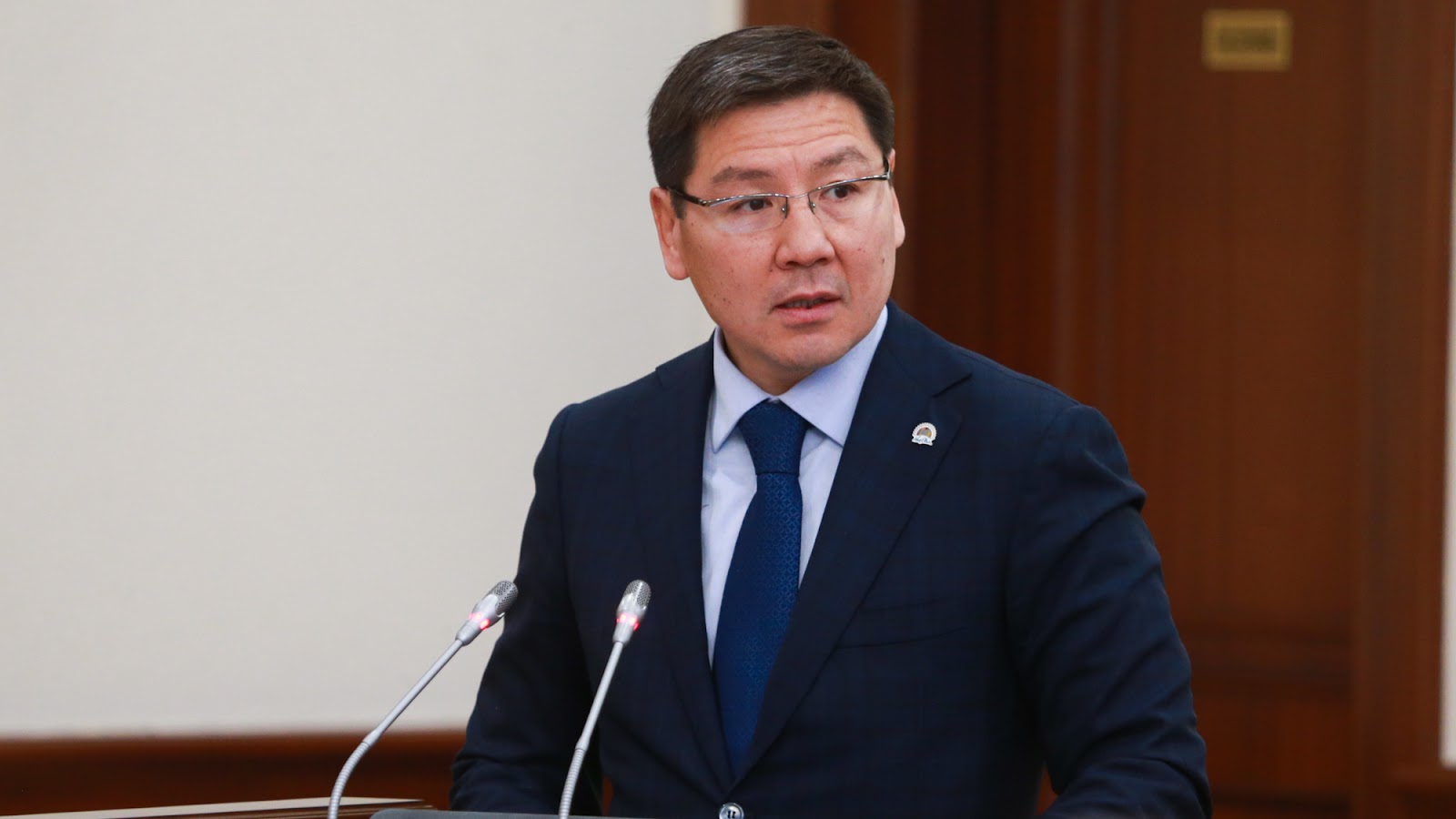 “This issue depends directly on the owners of buildings and the heads of government agencies. We have removed all the issues that hindered the signing of this instruction today by signing a government decree. In the near future, the issue should be resolved, and after that, civil servants will be able to use smartphones. After some time,” Zhumagaliyev said.

According to him, there are no fixed dates. This is an ongoing process of agreement and discussion. In each state agency, this issue is consistent for about a month.

At the press conference, Minister of Labor and Social Protection of the Population Birzhan Nurymbetov answered journalists' questions regarding measures taken to increase wages for low-paid workers, to strengthen requirements for enterprises attracting foreign labor, as well as on the Zero Injury Concept, the main goal which is to reduce the number of accidents and jobs with harmful working conditions. 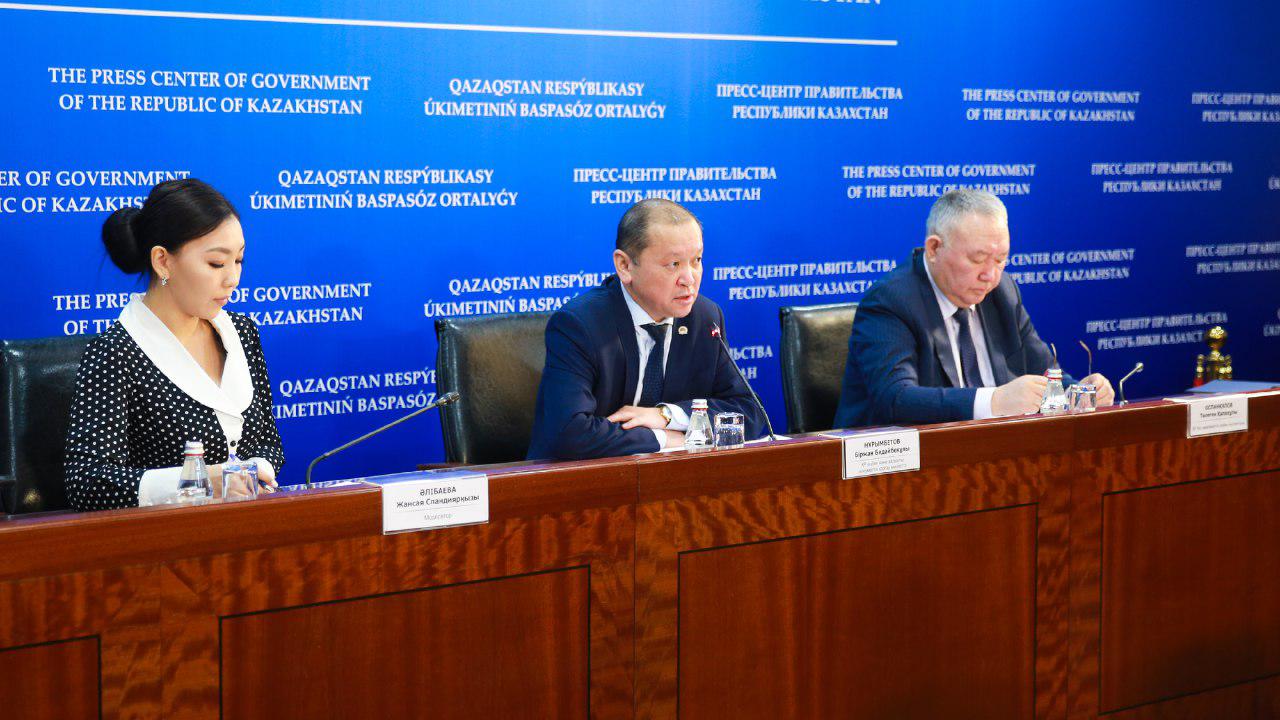 The correspondent of the republican television channel asked the minister about methods of resolving labor conflicts in the regions, how local work would be improved.

According to Nurymbetov, after conducting appropriate checks at enterprises attracting foreign labor, a problem was revealed with the imbalance in creating conditions and wages between Kazakhstani and foreign specialists. In this regard, the ministry prepared a number of amendments to the legislation of the Republic of Kazakhstan. 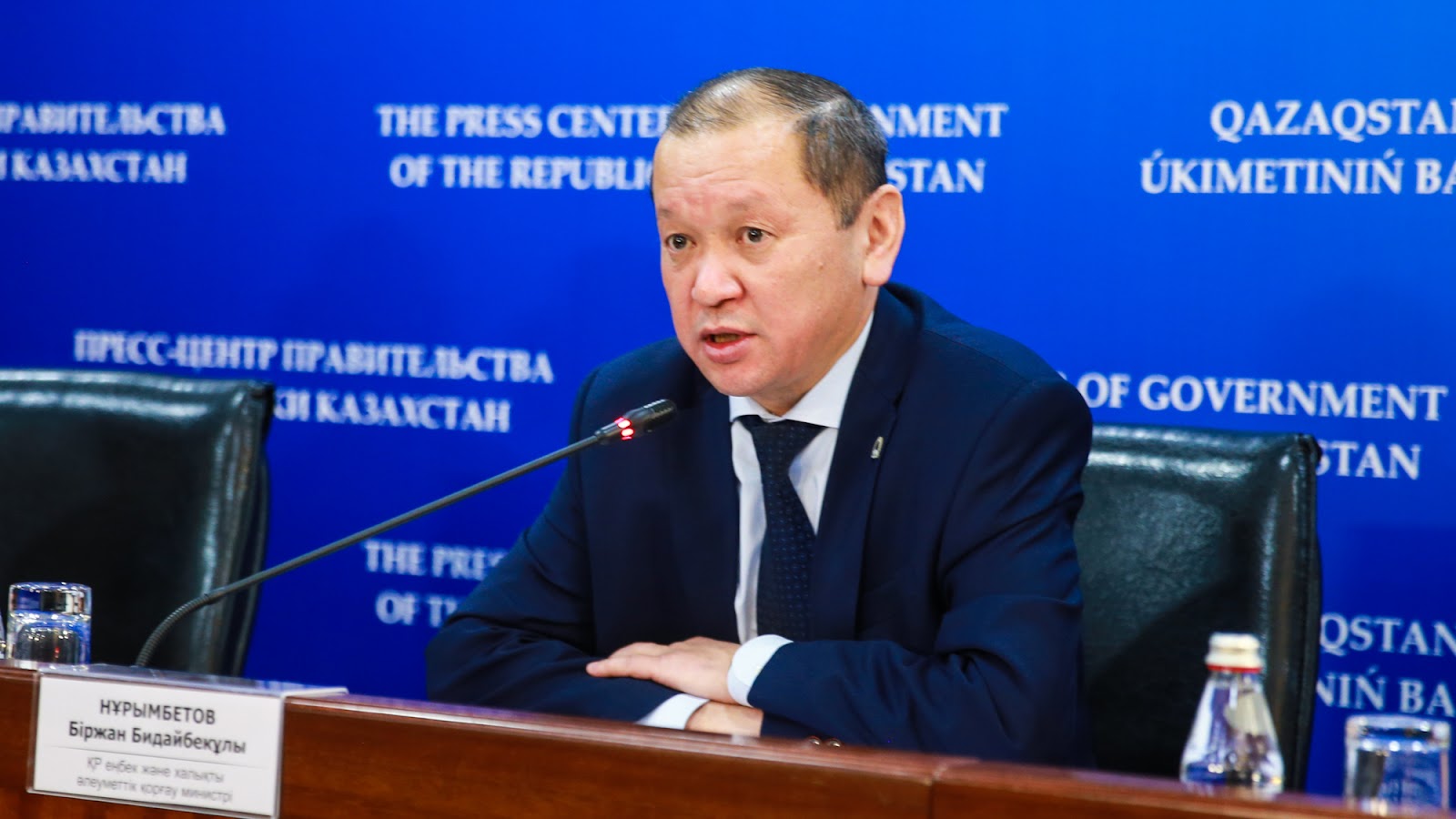 “Today, according to the current legislation, the state labor inspector cannot plan to inspect enterprises annually – only once every five years. Therefore, for companies that attract foreign labor, we make proposals in the inspection criteria to enable the Labor Inspectorate to regularly check these enterprises annually,” the minister said.

At the same time, it was recommended that regional akimats form a quota for attracting foreign labor after a comprehensive study of the labor market and ensure an increase in local staffing levels by employers attracting IRS. 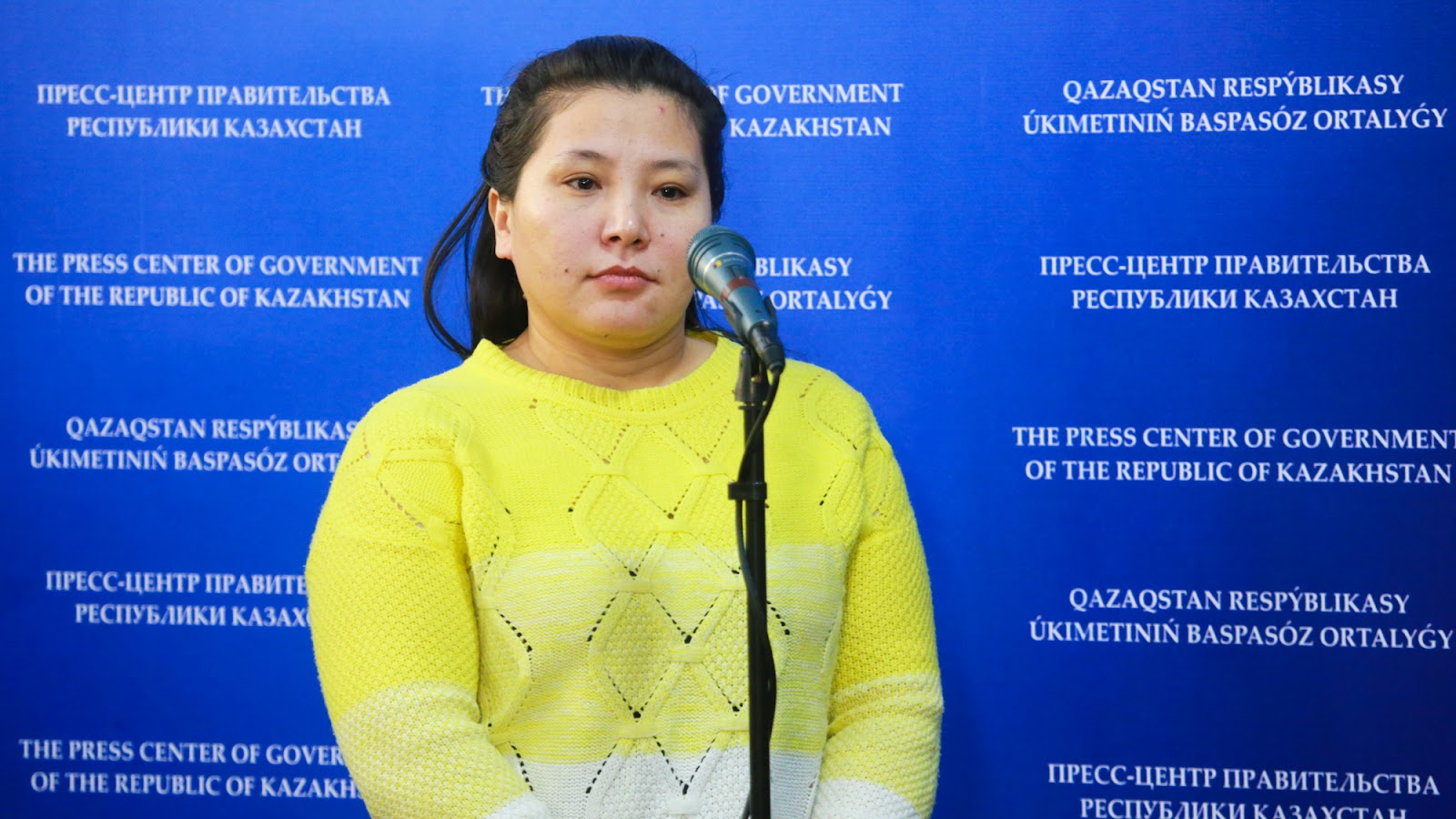 “Today, 50 thousand foreign specialists are allowed to work in our country. We are now preparing a quota for next year. The Ministry of Labor and Social Protection of the Population intends to propose to the Government to almost halve this quota,” Nurymbetov said.

When asked by a correspondent of one of the news agencies about measures taken to increase wages for low-paid workers, the Minister of Labor and Social Protection of the Population replied that only the minimum wage is regulated by labor legislation in the republic. Everything else is at the discretion of the employer.

“Since the beginning of the year, within the framework of social responsibility, 203 thousand enterprises of the republic increased wages of 1.2 million employees by 32%,” Nurymbetov said. 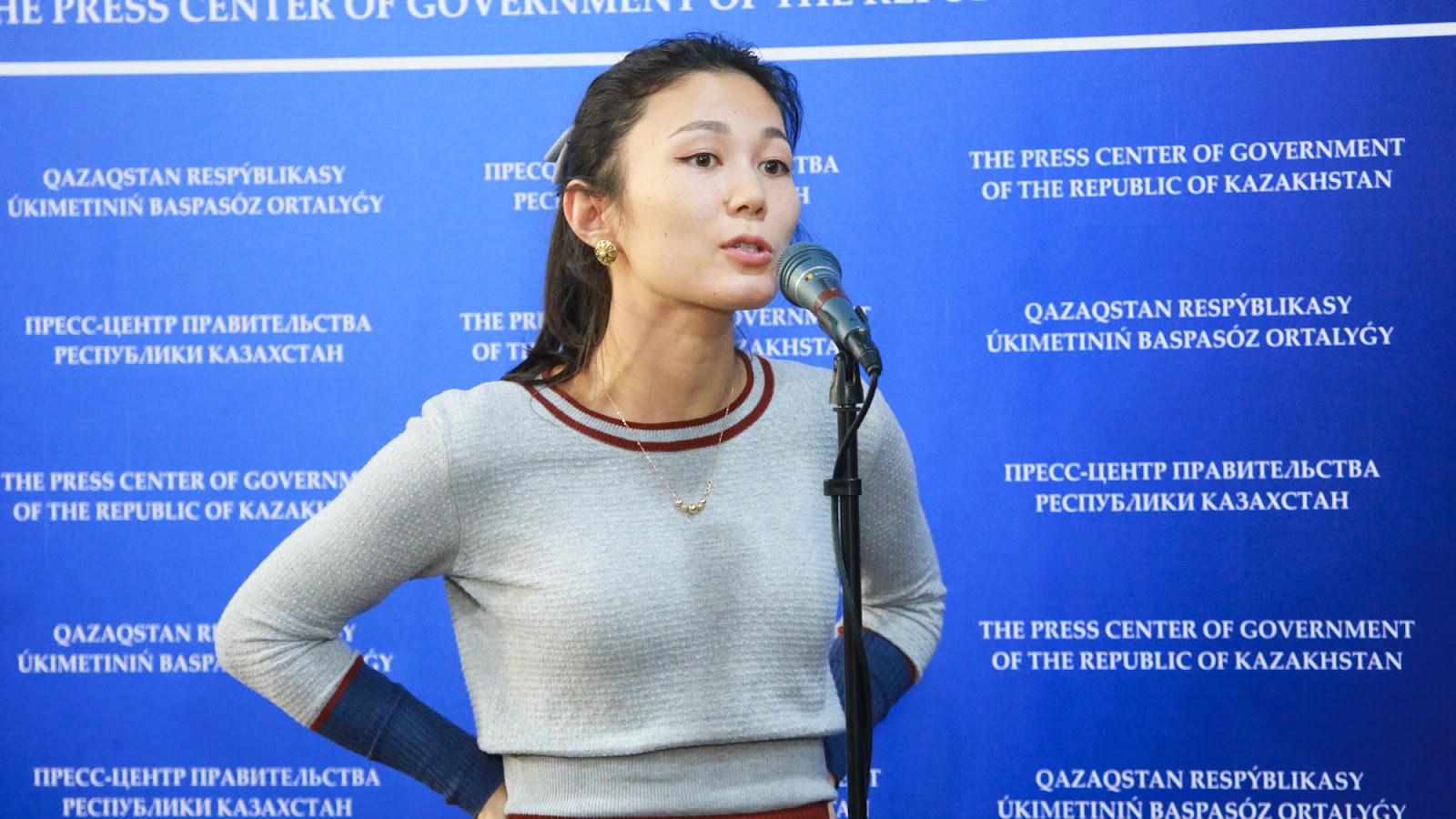 The minister also said that in the western regions of the republic there is a problem with the imbalance in wages between Kazakhstani and foreign specialists. Since August 2019, under the auspices of the General Prosecutor's Office, an audit of 95 enterprises was carried out, which attracted more than 30 foreign specialists. As a result of inspections, 930 facts of violations of labor and migration laws were revealed.

“Most companies raise salaries for Kazakhstanis, but there are facts when they lower foreigners. That is, it depends on how the employer decides. The main thing is that he must fulfill the requirement - that, with equal posts, equal work and qualifications, wages should be equal,” Nurymbetov said.

As part of the issue of measures taken to reduce the number of accidents and jobs with harmful working conditions, Nurymbetov spoke about the Concept of “Zero Injury – Vision Zeroю” This year, Kazakhstan joined the ranks of this Concept. 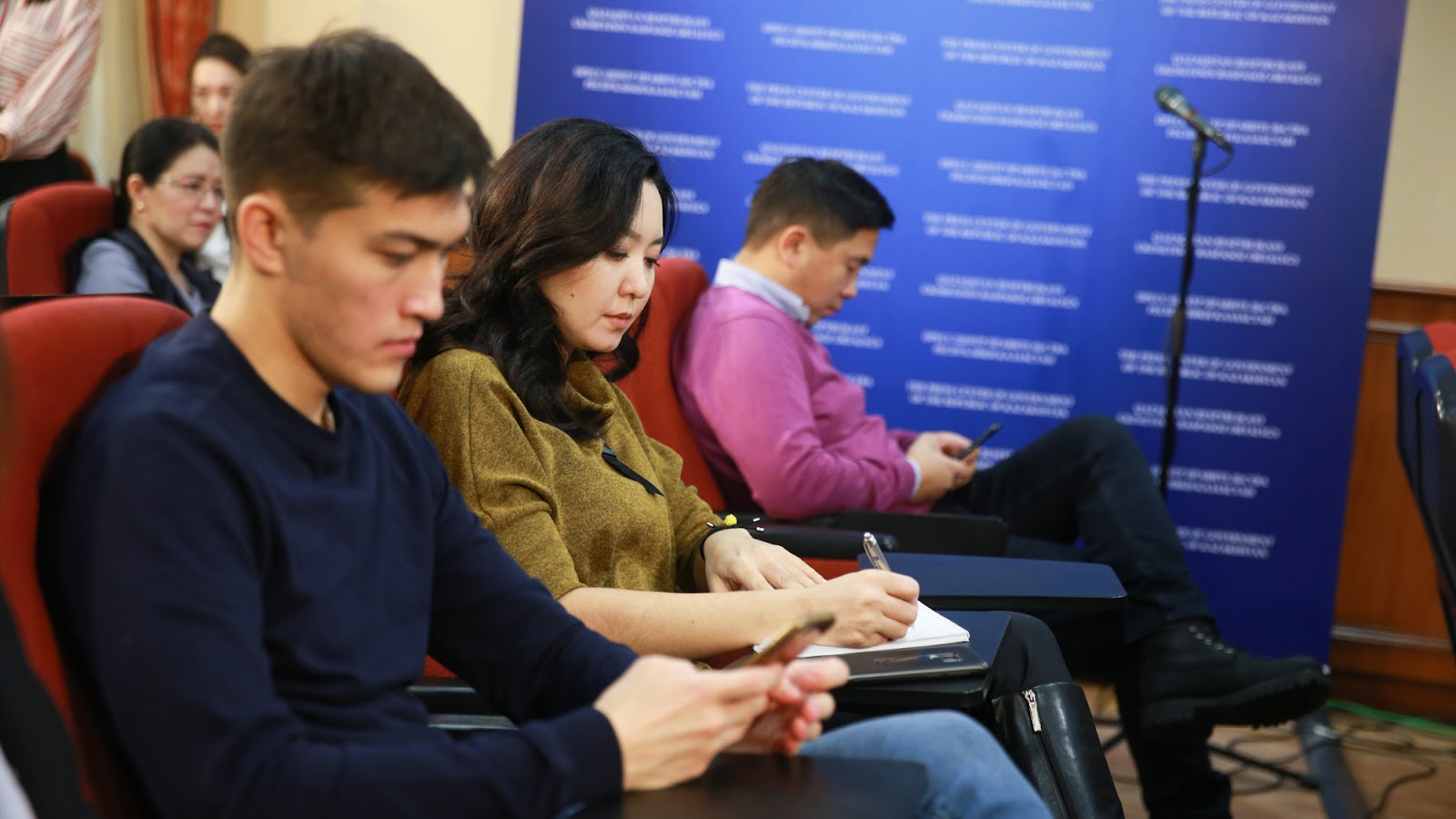 “Our country has joined this concept, confirming its desire to reduce the minimum occupational injuries that exist today in the field. We have recorded 1069 facts of work-related injuries, while already 129 people died in the workplace,” the minister said.

Nurymbetov called on domestic unions to be active and interested in creating appropriate advice on the elimination of injuries in the workplace.